The Evolution of Taste

What was the first tea you tasted? If you’re American, it was probably a cheap teabag filled with black tea dust, probably steeped for a long time and possibly drowned in milk and sugar.

If you have a taste for adventure, you probably tried a few other things later on. Earl Grey, perhaps, or possibly a pot of nondescript green tea at the Chinese restaurant down the street. Then maybe — just maybe — you stopped into your Friendly Neighborhood Indie Tea Shop™ and had your mind blown by an amazing oolong or a mind-blowing pu-erh. Now you want to taste all the tea!

Congratulations, you’ve just become the perfect candidate to join the tea tasting club at my shop (the Phoenix Pearl Tea Tavern), but let’s leave that for another blog post.

Thankful to have left that cruddy old Lipton behind, you plow forth into the tea world. You taste exotic green teas like genmaicha (roasted rice tea), hōjicha (roasted green tea), and kukicha (twig tea). You savor delicate white teas like silver needle. You chase down both sides of the pu-erh spectrum, sampling rich complex sheng and deep earthy shu. You try the full range of oolongs, from buttery jade to crisp Wuyi. You might even be lucky enough to find a tea shop with a yellow tea. Wow.

But you’ve left the black teas behind, your impressions tainted from those teabags you drank back before you became enlightened.

Yesterday, I taught a tea class on the teas of China. In it, we tasted all of the major tea styles, and sampled our way through five prime tea-growing provinces (Anhui, Fujian, Jiangsu, Yunnan, and Zhejiang). There were oohs and ahs over the bai mudan white, the roasted tieguanyin (Iron Goddess of Mercy) oolong, and the longjing (dragonwell) green. But do you know what stopped everyone cold in their tracks? The black teas.

I pulled out my favorite Keemun mao feng. If you’ve never tried one of these, stop reading now, buy yourself a bag, and come back. Ready? Okay. Let’s continue. 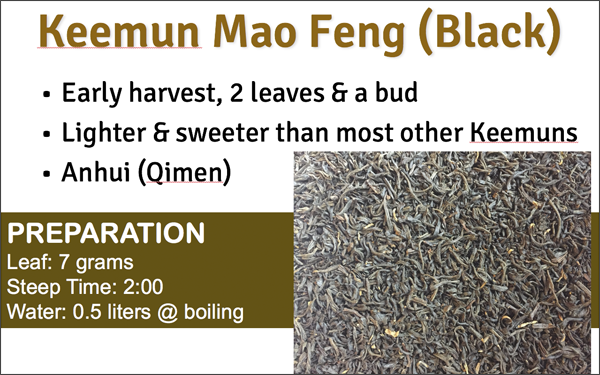 It’s easy to fall in the trap of considering black tea the “cheap stuff” and all of the other varieties the “good stuff” (except for that pond scum the Chinese restaurant down the street thinks of as green tea, but we’ll just ignore those guys). Nothing could be farther from the truth.

Keemun mao feng has a lot going on. It’s rich and complex, lighter than you’d expect, and if you consider grocery-store-brand teabags representative of black tea, this stuff will open your eyes. The people in my class kept commenting on how many layers of flavor this tea has, on how it changes as you hold it on your tongue, and the subtle sweetness they picked up in this (completely unsweetened) cup of tea.

Note, by the way, the steeping instructions in my slide above. You may like yours steeped longer than the two minutes I recommend. That’s fine. I’m no tea Nazi. Drink it the way you like it.

Next, we tried a dian hong, also known as a Golden Yunnan. It flips you clear across the flavor spectrum, with that color in the glass saying “oolong” as the flavor says “black tea.” 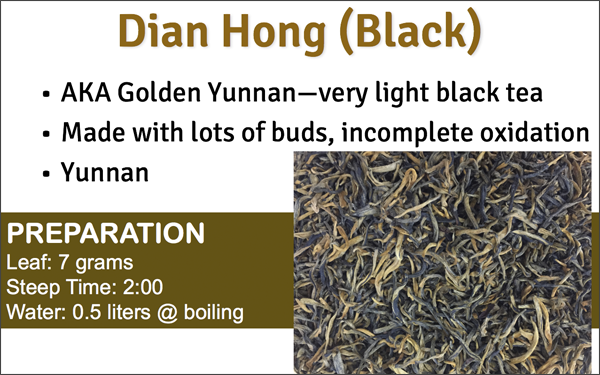 If you’re at this point in your exploration of the tea world, congratulations! You’ve left the cheap black tea behind and opened yourself up to a whole world of other tea styles. Now it’s time to come back home to black teas. Try the two I talked about above. Explore the vast difference between India’s tea-growing regions by drinking a first-flush Darjeeling, a hearty Assam, and a rich “bitey” Nilgiri. Sample the Rift Valley teas from Kenya (the largest tea exporting country in the world). Island hop with some Java and Sumatra tea. Drink a liquid campfire with a steaming cup of lapsang souchong.

Once you’ve experienced the range of flavors, textures, terroirs, and aromas from top-notch loose-leaf black teas, you’re still not done. Now is the time to turn your newly-expanded palate loose on some blended teas, like high-end English Breakfast. Go back and taste some of the flavored black teas like Earl Grey. Play with some masala chai and some tea lattes (try a strong Java tea made with frothed vanilla soy milk!). Start experimenting with iced tea, brewing it strong and pouring it over ice.

You may decide that you’ve moved on from black tea and that’s great. Or you may just find that you’ve developed a whole new appreciation for that stuff that got you started on tea in the first place.

As I write this, I’m sipping on a 2017 1st flush Darjeeling from the Glenburn estate. It’s very different from last year’s, when the picking was delayed by heavy late rains. You’d swear this was oolong tea. It’s extremely different from teas picked at that estate later in the year. I don’t know what (if anything) we’re going to end up with for a 2018 1st flush, as many of the estates in Darjeeling were left in horrible condition after this summer’s strikes, so if you have some Darjeeling tea you like, don’t waste it!

Jasmine first made its way to China from Persia (now known as Iran) over 1,700 years ago, and it took hundreds of years before it was used to scent tea. Even then, it spread quite slowly, and it wasn’t until the Qing Dynasty, which began in 1644, that it became widespread.

The making of jasmine tea is quite different from typical flavored teas. Most flavored teas are either blends, where dry ingredients are mixed together, or tea leaves sprayed with flavor extracts, like Earl Grey with its bergamot oil. Jasmine tea, on the other hand, is scented rather than flavored.

In the traditional process, jasmine flowers are picked early in the morning, when the blossoms are still tightly rolled. Trays of processed and dried tea leaves (usually, but not always, green tea) are stacked in alternation with trays of jasmine. The trays have woven mesh or screens as bottoms, so as the jasmine blossoms open up and release their scent, it travels freely into the tea leaves over the course of about four hours.

A typical loose-leaf jasmine green tea from the Fujian province in China.

The tea leaves pick up moisture from the flowers along with the jasmine scent, so they have to be re-dried before they can be packaged. In the finest quality jasmine teas, this scenting process may be repeated half a dozen times or more. The finished tea has no jasmine blossoms in it — only the scent that has transferred.

How you prepare a cup of jasmine tea depends on the base tea used. If it is made form a green tea, as most of them are, then you’ll want to use 175-185°F (80-85°C) water, and steep for three minutes or less. Using boiling water is a quick way to ruin a good cup of jasmine tea — or any other green tea, for that matter — by bringing out unwanted bitterness.

Grades of jasmine tea vary with the quality of the tea and the process used. One of the popular higher-end styles involves tea leaves that are tightly rolled, often known as “jasmine pearls.”

When drinking jasmine pearls, seven balls are placed in a small cup. Seven is considered good luck, so with jasmine pearls you don’t weigh them out or measure them in a tablespoon. Each rolled ball contains two leaves attached to a bud, which will slowly unfurl when the hot water is added.

Unlike most loose tea, jasmine pearls are infused right in the cup with no screens or filters, and you don’t remove them before drinking. The unbroken leaves assure that if you sip carefully, you won’t get a mouthful of leaf. If you’re drinking jasmine pearls with friends, the host should make sure that there’s always more hot water available to keep refilling the cups.

Jasmine blossoms certainly aren’t the only flowers used to scent tea — I’ve written about Vietnamese Lotus Tea, for example — but jasmine is definitely the best-known and most popular.

What’s the difference between Japanese and Chinese green tea?

As I did last month and the month before, I took a look at some of the search terms that brought people to this blog and found a question that I didn’t really address. This time: “What’s the difference between Japanese and Chinese green tea?” The obvious smart-aleck answer is that one comes from Japan and the other comes from China, but it runs a bit deeper than that.

First off, it’s not the plants themselves. The first varietal discovered of the tea plant is Camellia sinensis var. sinensis: the Chinese tea plant. About 1400 years ago, during the Sui Dynasty, Buddhist monks introduced tea — and the tea plant — to Japan. This means that the same varietal of tea plant is growing in China and Japan.

Terroir, on the other hand, can definitely have an effect. The climate, soil, and other factors can definitely affect the taste of the tea. Also, the Japanese have been crossbreeding and developing their strains of tea plant for over a millennium.

The biggest factor in the taste, though, is a very simple one: the process.

The difference between black tea and green tea is oxidation. Black tea is fully (or near-fully) oxidized, while green tea is not oxidized at all. There is an enzyme in the tea leaf that starts the oxidation process as soon as the leaf has been broken or bruised. Making green tea requires a “kill green” step that destroys the enzyme and stops the tea from oxidizing. That step requires heating the tea leaves quickly to at least 140 degrees.

Granted, I am oversimplifying, but this is the fundamental answer to the question.