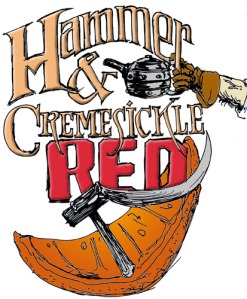 Isn’t it fun how names develop for tea blends? The naming process is almost as much fun as the blending process itself.

For weeks, I had been trying to come up with a tea that invoked the taste of the creamsicles I used to enjoy so much as a kid (Who am I kidding? I still enjoy them!). Frozen orange over a vanilla bar. Yum! My initial attempts were based on black teas, and the flavor of the tea kept overwhelming the flavor of the orange and vanilla.

Finally, I hit on something that seemed to work. A blend of rooibos and honeybush as a base, which adds a rich, creamy texture. Orange and natural vanilla for the cremesicle flavor, and just a touch of carob to round everything out. I tried it both hot and iced and decided I liked it.

Some friends, Al and Ranetta, popped by the tea bar, and I asked if they’d like to sample my newest concoction. Being willing guinea pigs, they acquiesced. They tasted, we talked, and they liked it. Ranetta asked if she could buy a few ounces. As I started to write out the label, my hand stopped, poised to write, as I realized I hadn’t named the new blend yet.

I decided to write “orange creamsicle,” but Al was talking and distracting me (It’s all Al’s fault. Really it is). I misspelled the word. Unbelievable, isn’t it? But I threw an extra K in there. I noticed the error and commented on it.

It struck us both at about the same time that this is a red tea (the rooibos plant is also called the African redbush), so that could end up as a very fitting name. Al asked for a sheet of paper and set to work sketching a logo. I scanned, tweaked, and colorized his masterpiece (sorry, Al) and included it at the top of this blog post.

(Please imagine, in the following paragraph, that I’m speaking with the same accent as Mickey Rourke used when playing Whiplash in the second Iron Man movie. If you can’t do that, I’ll settle for Boris Badenov from the Rocky & Bullwinkle show.)

You must buy Hammer & Creamsickle Red now, comrade. Will take you back to childhood summers at family dacha on Volga river. Decadent treat from American capitalists. We have our own capitalism now; our own pravda. We have no money, but tea is cheap. Try now.

[UPDATE Feb 2012: We used this tea in the frosting for our Orange Spice Carrot Cake Muffins. It worked beautifully!]

[UPDATE Apr 2012: Al has drawn us another logo, this time for Robson’s Honey Mint Tea. He does great work.]

[UPDATE May 2012: Hammer & Cremesickle Red Tea is now available on our new Tea Bar website. I’ve updated the links in this article accordingly.]