How much caffeine is in my tea?

I wish there was a simple answer to this question. It would be ever so cool if I could just say, “black tea has 45 mg of caffeine per 8-ounce cup.” In fact, a number of people say it is that simple. This graph came from the front page of the eZenTea website: 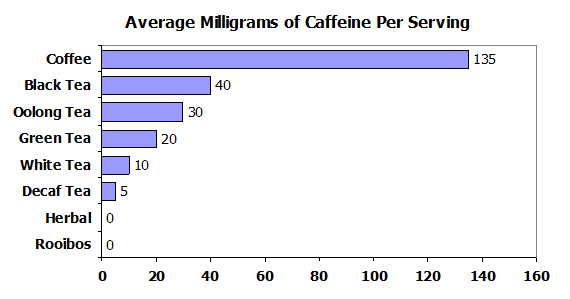 And this one just showed up in my Twitter feed from SanctuaryT (the tweet said, “Finally, the truth about #tea and #caffeine!”):

Then we get confusing (and frankly pretty silly) charts like this one from HellaWella: 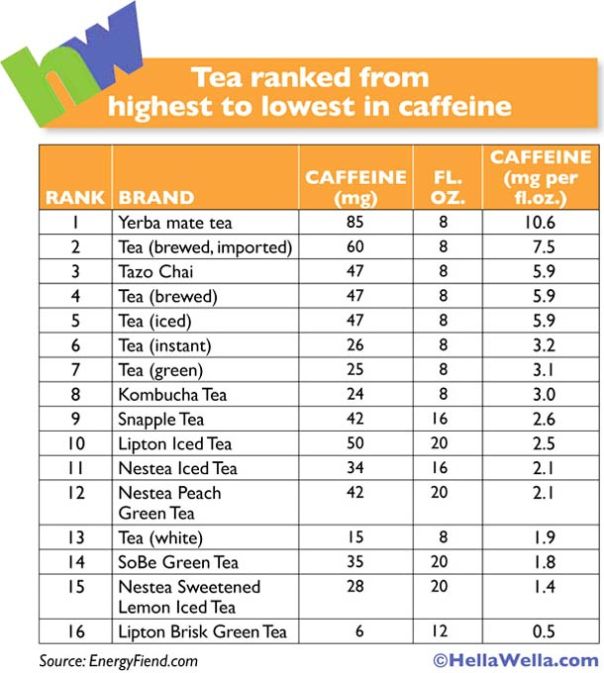 All three charts have green tea in the same basic range (20-25 mg/cup), but the HellaWella chart breaks out black tea (which is 40-42 mg/cup in the other two charts) into “brewed tea” at 47 mg/cup and “brewed imported tea” at 60 mg/cup. Huh? “Imported”? HellaWella’s “about” page doesn’t say what country they’re from, but I’m going to guess from the spellings that they’re from the U.S. Sure, there are few small tea plantations in the U.S., but I would venture to guess that approximately zero percent of casual tea drinkers have ever had a domestically grown tea. In America, pretty much all tea is “imported.”

So why the discrepancies?

Because the people making these charts (a) don’t explain their methodology and/or (b) don’t understand tea.

As I explained in my three-part caffeine series (here’s part 1), green, white, oolong, black, and pu-erh tea all come from the same species of plant (Camellia sinensis), and in some cases, the same actual plant. We carry a black and a green Darjeeling tea that are picked from the same plants, but processed differently. No part of that process creates or destroys caffeine.

Let me make that clear: let’s say you pick a bunch of tea leaves on your tea farm. You divide them up into four equal piles. You turn one pile into green tea, one into white tea, one into black tea, and one into oolong tea. When you’re done, you make a cup of tea from each. Assuming you use the same water at the same temperature, use the same amount of leaf per cup, and steep them for the same time, they will all have the exact same amount of caffeine.

If that processing doesn’t change the caffeine content, what does?

Even if you and I measure the same amount of leaf out of the same tin of tea, your cup might have twice the caffeine of my cup, depending on how we like to fix it. Unless we both precisely followed the ISO 3103 standard for brewing the perfect cup of tea.

Unfortunately, the lab tests to assess caffeine content are expensive, so most tea shops never test their teas. On top of that, people can’t seem to agree on how to brew the tea they are testing. I read one study where every tea was brewed for five minutes in boiling water. That’s consistent, but it’s not realistic. You don’t brew a Japanese green tea that way, or you’ll have a bitter, undrinkable mess. Another, by Kevin Gascoyne, tested tea as most people drink it (e.g., black tea in boiling water, white tea in cooler water). That’s better but even still, Kevin’s way of brewing a particular tea may not be the way I do it.

UPDATE: After I wrote this post, but while it was still in the scheduling queue, a blog called The Tea Maestro put out a post about this same subject, titled “The Latest Buzz on Tea and Caffeine.” If you’re interested in caffeine and tea, I’d recommend reading it. If not, I can’t imagine why you’re reading this post!

The bottom line is that every tea is different. Very different. In fact, Kevin tested two different sencha teas and one had four times the caffeine of the other. If someone shows you a handy-dandy chart that indicates exactly how much caffeine a cup of tea has (as opposed to showing a range), it’s wrong.

While writing this blog post, I was drinking Green Rooibos from South Africa, which has no caffeine at all. It is a non-oxidized “redbush” tea that I blogged about back in 2011 (“I’ll have a green red tea, please“). I brewed this cup for 4:00 using boiling water. It’s a remarkably forgiving drink, and I’ve steeped it for as long as 10 minutes without ruining it. It’s usually good for at least two infusions.