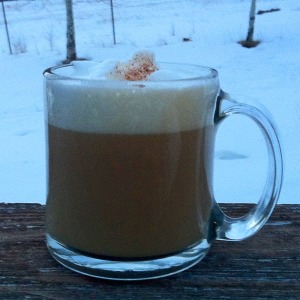 You can keep your hot chocolate. I’ll take a delicious masala chai latte on a snowy day!

Before we address the topic at hand, may I take a moment to get something off of my chest?

Today we are discussing a tea called masala chai. The word “masala” refers to a yummy blend of spices, often containing cardamom, ginger, and pepper. The word “chai” means “tea” in Hindi (and Urdu, and Russian, and Bulgarian, and Aramaic, and Swahili, and a variety of other languages). Therefore, when you refer to “chai tea,” you’re talking about “tea tea.” Although most Americans call masala chai just “chai,” they really should be calling it “masala” or “masala tea” if they don’t want to say “masala chai.”

We can thank the coffee industry for confusing our terminology a couple of decades ago, as they coined the phrase “chai latte” to differentiate masala chai (traditionally made with milk) from coffee lattes. Your other word of the week is “latte,” which just means “with milk” and has nothing whatsoever to do with coffee. Tea made with heated and frothed milk is a latte, too!

Thank you. I feel better now. On to the aforementioned topic at hand:

I would never presume to tell you the right way to make a cup of tea. As I’ve mentioned so many times before, there is no single right way to do it. In this post, however, I will talk about one of the traditional ways to make masala chai. In India, where this concoction (or decoction, if you prefer) originated, it is almost always made with milk and sugar.

In a coffee shop, masala chai (which they usually call a chai latte) is almost always made from a pre-sweetened concentrate. It’s quick and easy to make, and it tastes pretty good. But it doesn’t taste like authentic masala chai.

In a tea shop, masala chai is usually brewed fresh from a blend of black tea leaves and masala spices. If they add milk, it is usually poured in after the tea is brewed, unless the tea shop is specifically set up for lattes. You get that fresh-brewed taste, but somehow the spices don’t seem quite right to me (my tea bar does it differently, but that’s a topic for another post).

At home, you can make it the way they do in India.

First of all, the masala spice mix and the tea (chai) are usually purchased and stored separately. Just as many Americans have a family chili or soup or cookie recipe, many Indian families have their own masala recipe handed down through the generations. You can research and experiment to come up with your own, or go to your favorite tea shop and see if they have a blend for sale. Many tea shops (including mine) will sell you the masala spice mix they use in-house without the tea.

If you’re really serious about it, you’ll make each batch up fresh, grinding cardamom, cloves, cinnamon, pepper, ginger, and whatever other spices you use as needed. I know a few folks that do it that way, but not many. I’d recommend starting with a mix that you like.

In India, the tea leaf of choice is usually a rich black Indian tea like Assam. It’s brewed pretty strong so that you can taste the tea through all of the spice and milk and sweetener. That doesn’t mean you need to use an Assam, but it’s a good place to start.

Milk serves a definite purpose in masala chai. You can extract flavor from many spices much better in fats or oils than you can in water, as any chef will tell you. Steeping the spice blend in milk will result in a richer, more nuanced flavor than steeping it in water. In India, the milk of choice is typically water buffalo milk, which can be difficult to get hold of here in North America. The usual substitute is whole milk, although 1% or 2% is common with the more health-conscious crowd. Nonfat milk is rather pointless, as the fat is the main reason for using it.

Sugar. Some drink their masala chai unsweetened, but if there is sweetener, it will typically be sugar.

That said, when I’m making masala chai at home, I usually use honey or agave nectar.

You’ll need a pan, a stove, and a strainer to do this. This is my recipe for making enough for you and a few friends. Adjust accordingly if you’re drinking it by yourself.

Put out more sugar or other sweetener for your guests. That single teaspoon is a lot less than a traditionalist would use, but I prefer to let everyone choose their own level of sweetness.

For best results, enjoy with your favorite Indian foods. Masala chai does a wonderful job of cutting the spiciness of curries. You can also use your masala chai tea in your Indian cooking: see my post on Chai Rice.

NOTE: The resulting masala chai will not look like the latte in the picture above. To get that look, I frothed up some milk and placed the foam on the top of the cup, and then added a dash of cinnamon powder.