The coffee industry would have you believe that the word “latte” means “espresso with steamed milk.” That basically is what “caffelatte” means, but “latte” just means “milk” in Italian. A tea latte is every bit as much a latte as a coffee latte, and the growing popularity of masala chai lattes has been bringing that point home to coffee drinkers of late. In the coffee world, a latte is typically made by preparing the espresso, mixing in the milk, and then adding foam on top. The milk is there to add flavor and to cut the espresso so it doesn’t taste as strong. In the tea world, the milk serves a somewhat different purpose. For the record here, I am not talking about Starbucks-style chai lattes, which are made with a sweet syrup. I’m talking about tea that’s fresh-brewed in milk and water.

Flavors and nutrients from tea leaves extract well in water. That’s why a straight cup of tea tastes so good. That’s why people who like milk in their tea traditionally add the milk after the tea is brewed. A lot of other things, however, don’t extract quite as well.

Many of the flavors in a masala spice blend (no, they aren’t chai spices — chai just means “tea” in Punjabi) are lipophilic. Directly translated, this means “fat-loving,” which means that they extract much better in fats (e.g., milk) than in water. That’s why it’s important to brew the masala chai in hot milk and water instead of just adding the milk later. In my tea bar, we’ve done side-by-side taste tests of tea lattes made both ways. We use a milk heater/frother instead of using the steamer that’s found on commercial espresso machines. We tried steeping the tea in water and then adding the frothed milk vs steeping the tea in a 50/50 blend of hot water and frothed milk. In this entirely subjective set of tests using our employees and customers, the lattes brewed with milk won consistently. I realize that our production method wouldn’t work in a typical coffee shop where people are rushing in and out on their way to work. They want their drink now. They don’t want to wait four to seven minutes for a fresh-brewed cup. But in a tea bar like mine, things are different. We make a lot of lattes — close to 1/3 of all of the cups we serve. We offer a choice of milk (nonfat, 2%, whole, half-and-half, soy, almond…), and over 150 different types of tea. 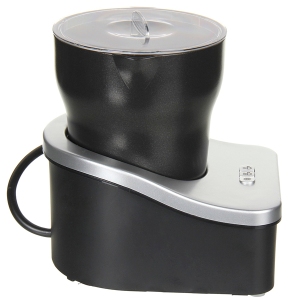 The majority of our lattes are served unsweetened. For those who want it sweetened, however, we do the same thing we do when making traditional sweet tea: we add the sweetener when we’re brewing instead of at the end. Most of our customers go for either plain sugar or agave nectar, but we offer other options there, too: flavored hail sugars, honey, stevia leaf, stevia powder, and other artificial sweeteners. You can’t do something like this in a fast-moving production line environment, but you can do it at home. A milk heater/frother is less expensive than a high-end home coffeemaker. We started out with Keurig units, but found they didn’t hold up to commercial use. There were too many fragile parts, and most of them broke in the first six months (that Keurig unit didn’t even end up on this list of the top 10 frothers). We switched to the Capresso frothPRO and we’ve been quite happy with them. They aren’t the fastest solution, but they’re solid, reliable, and easy-to-clean. It’s also easy to switch between heating/frothing and just heating. If you don’t want to invest $50-$100 in a frother/heater, there’s another solution that works great at home. Just heat the milk in the microwave. Don’t let it go to a boil, but get it as hot as you can without boiling it. There are quite a few handheld battery-powered electric whisks available if you like it frothy; the list I linked in the previous paragraph includes three of them.

How do you know which types of tea work best in a latte? Experiment. One of the most popular tea lattes is called a London Fog. It’s very straightforward: just Earl Grey tea and a 50/50 mix of milk and tea. We usually start the tea steeping in water and add the milk halfway through. Make sure you use the right amount of tea leaf for the total volume of milk and water; if you’re using 8 oz of milk and 8 oz of water, use enough leaf for a 16 oz mug. Many of our blends with cinnamon make good lattes, as do fruity teas. We use sweetened matcha powder for our green tea lattes. Want something different? Try making a strong shu pu-erh latte with chocolate milk. Experiment, have fun, and then teach all of your coffee-drinking friends just how many kinds of latte there are!