Random observations from the tea bar

Looking for something pithy and educational about tea today? Well, you picked the wrong blog post. Today I am just posting a free association of recent observations and happenings at the my tea bar.

Never give up. Never surrender.

I love pu-erh tea. I have far more of it in the tea bar than our local population can justify, especially if you include the “dark tea,” which is tea fermented like a pu-erh but not produced in Yunnan. I have grown used to having to explain pu-erh to every person I mention it to. It’s part of the education mission of the tea world.

Then, one of my regulars brought in a friend from out of town. He bought a quarter-pound each of Irish Breakfast and my own Scottish Breakfast blend (which I call “Gary’s Kilty Pleasure”). He asked for something different, and I asked if he’d tried pu-erh. He knew what it was! He liked it! We probably spent 15 minutes talking about pu-erh and he bought a tuo-cha (bird’s nest shaped pu-erh cake) and some loose pu-erh. The education efforts of tea shops around the country are paying off!

Some of the equipment in the tea bar has worked beautifully since the day we bought it. Some has been a source of endless frustration.

The milk heater/frother units we got from Keurig? One broke in just over 3 months, the other in just under a year. Fragile parts, hard to clean, cheap construction. The ones we got from a company I’d never heard of? Both working beautifully.

Tea timers? I suppose it’s not the manufacturer’s fault that we drop them from time to time. But some timers survive multiple drops and some die after the first.

Frothing wands? I just had to deal with our third dead wand in a year. They really should last more than six months. This just isn’t acceptable.

Found this out the hard way. One of our distributors carries these wonderful little pressed hearts of tea they call Antony & Cleopatra. I thought it was a cool novelty idea and ordered a pound of them. They’re black tea, not a pu-erh like most pressed teas. They are actually halfway decent black tea, which makes them better than just a novelty item. Just drop it in the teapot, pour in boiling water, and in a few minutes you have a cup of tea.

I put a big jar of them (sealed, of course) on the tea bar and a little plate (actually a cute little teapot-shaped teabag holder) in front of the jar with some of the tea hearts on it. Can anyone guess what happened? Anyone? Bueller? Yeah, that’s right. People ate them. Apparently compressed tea leaves make pretty yucky-tasting cookies. Who’d have guessed?

Bleach is your friend

Ever hear commercials for cleaning products that say “even gets out tough tea stains?” There’s a reason for that. Tea stains everything, especially infusers, filters, and teapots. Luckily, a tablespoon of bleach in a pint of water will get rid of all those tea stains in no time flat. Of course, you’ll be rinsing the bleach smell out for a little while, but it’s worth it. Sparkly clean!

Everybody thinks lattes have to have coffee in them

“Latte” is used in English as a short form of the Italian “caffè latte,” which simply means “coffee with milk.” Other drinks can have milk in them, too. Tea lattes are absolutely wonderful drinks. Generally speaking, they have two ingredients: tea and heated/frothed milk. Sometimes a sweetener. So why is it that people keep asking what kind of coffee we add to our tea lattes? They aren’t tea caffè lattes. They are tea lattes.

There. I feel better now. 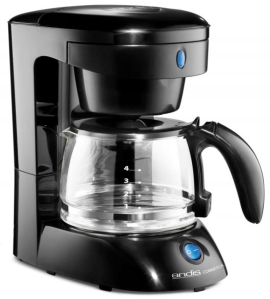 I try not to obsess over web statistics, for that way lies madness. I do, however, enjoy looking over what web searches bring people to my humble tea blog. One caught my eye today, as it seemed to be just begging for a blog post: “Why does my tea taste like coffee”?

I mentioned in my Keurig K-Cup post last month that the tea it produced did not taste like coffee. There’s a reason that was notable enough to mention: every other coffeemaker I’ve ever used is unable to produce decent tea once it’s been used for coffee. The oils in the coffee may clean off of the glass from the carafe, but they will impregnate the plastic parts of the coffeemaker and there’s not a darned thing you can do about it.

If you want to perform a test, try running a pot of plain hot water through the coffeemaker and take a deep sniff. Then take a sip and hold the hot water in your mouth for a moment. If you can detect coffee at all, then you aren’t going to be able to brew a proper cup of tea from that water.

If, however, you brew mostly strong black teas and don’t detest coffee, you can reach an acceptable compromise. Run that plain water through, but this time add a couple of tablespoons of vinegar to it. It will take another few pots of plain water to get the vinegar smell out, but it will help with the coffee. Once you’ve done that, run one last full carafe of plain water with a tablespoon of bleach. Rinse everything thoroughly and let it dry overnight.

It’s not something you can do with a hotel coffeemaker, but if you want to switch your coffeemaker into a hot water maker for tea, this is a great start.