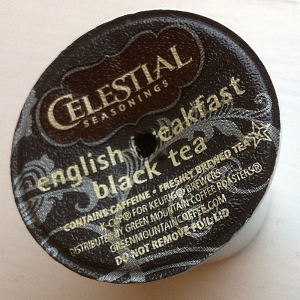 The Keurig pokes one hole in the top (visible here) and one in the bottom when it brews.

We checked into the Lake Hotel in Yellowstone last week for the latest stop on my book signing tour. As usual, I schlepped in all of my tea stuff so I could have a decent cup in the morning: electric kettle, teapot, a selection of loose-leaf tea.

Frequently, hotels have coffee makers in the room (unless you’re in Las Vegas), but I don’t like having my tea water taste like coffee, so I don’t use them.

In this room, however, was a Keurig® B130 In-Room Brewing System, the kind that uses the single-serving K-Cups. The sampling of K-Cups in the room included two regular coffees, two decaf coffees, one tea, and one herbal blend. I decided to give their Celestial Seasonings English breakfast tea a try. For some reason, Celestial Seasonings decided not to capitalize “English.” Because of my Scottish heritage, that makes me smile, but that’s irrelevant to the subject at hand.

Following their instructions, I took the sealed cup, which had its lid puffed out from the altitude, and inserted it in the machine. When I closed it (puncturing the top & bottom of the cup), the top of the coffee maker popped open. I added a cup of water, set the mug in its place, and looked for adjustments. Finding none, I just pressed “brew.”

The cup was ready surprisingly fast (one point for the machine), with much hissing and burbling. And it tasted like … your basic cup of breakfast tea in a restaurant. I don’t take milk or sugar in my tea, so I use shorter steeping times than the British generally do. Unfortunately, there are no adjustments on this machine, so I got a stronger, more astringent brew than I wanted. Minus one point.

I couldn’t taste any coffee at all in my tea — and I am pretty sensitive to that flavor — so that’s plus one point.

After my wife removed the tea K-Cup and made herself some coffee, I decided to see if I could get a second infusion out of the tea. I carefully lined up the puncture hole on the bottom of the cup and reinserted it. I followed the rest of the process as before, and got a pretty decent second cup. It was weaker than the first, of course, and similar to what you’d get if you reused a tea bag.

The used K-Cup was quite full of leaves.

Opening the used cup gave some insight into the workings. As you’d expect with a mass-market breakfast tea, they used CTC (crush, tear, curl) processed leaves, broken into quite small pieces. This provides the large surface area needed for the accelerated brewing process Keurig uses.

I understand you can purchase special K-Cups to fill yourself. It would be interesting to play around with whole-leaf teas and tweak the amount of leaf. Unfortunately, since you can’t adjust water temperature, the Keurig would destroy delicate white or green teas, and since you can’t adjust steep times, it would produce bitter oversteeped pu-erh or Darjeeling.

Interestingly, I took a look at the list of tea K-Cups on Keurig’s website, and it does include green and white tea. I’m guessing that their target audience probably uses boiling water in green tea anyway, and doesn’t realize it’s not supposed to taste like that. Most of their 50 selections are black tea, of course, and many are herbal tisanes rather than tea. There are a couple of chai selections there, and I’m guessing those would work.

In conclusion, if you’re looking for a fast, easy way to replicate your basic restaurant-style black tea, the Keurig will work admirably. If you want more than that, it’s a lot cheaper to buy an electric kettle and an IngenuiTEA, and you’ll get much better tea, too. The Keurig Brewer is at heart a coffee maker, and using it for making tea is like driving nails with a wrench: you can do it, but it’s a sub-optimal solution.